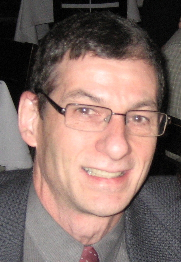 Louis is a programmer and a genealogist and a member of the Association of Professional Genealogists (APG) and Genealogical Speakers Guild (GSG). He developed the genealogy software Behold and built the GenSoftReviews site where genealogists go to rate and review their software. In 2016, Louis got into DNA in a big way and developed his Double Match Triangulator program for autosomal DNA analysis. The program won third place at the 2017 RootsTech Innovator Showdown.

Louis lives in Winnipeg, Manitoba with his wife and two daughters. He has been the chair of the Archives Committee, leader of the Genealogical Institute, and a Board member and President of the Jewish Heritage Centre of Western Canada. Louis is an active GeneaBlogger and participates in the genealogy communities on Twitter and Facebook.

Since Louis has registered for our Conference, we asked if he would give a talk in the late afternoon time period as Blaine Bettinger’s talk is now full. Louis has kindly agreed and will be talking on:
Using Double Match Triangulation to Find DNA Ancestors:  There’s more to a DNA segment match than you think. If the same segment is passed down from a common ancestor, it is called IBD (Identical by Descent). But matches can be by chance or false and you need to distinguish these. Find out what triangulation can and cannot be used for. Learn how to efficiently find all triangulations with double matching techniques and how to use triangulation groups to help you find your DNA ancestors. Level I-A.

Louis is also donating three licenses to his Double Match Triangulator software – two as door prizes and one to an attendee of his talk! We are very grateful for Louis’ generosity and look forward to having him at our Conference!
Posted by KDGS at 13:13

See the Publications page for details on how to access this material.

You are invited to drop in to the Downtown Library’s “Ancestry Meet-up”! These informal sessions happen every Wednesday & Thursday, 1-3 pm. The ORL provides laptops connected to Ancestry for your use and one-on-one guidance in using Ancestry to discover YOUR family history! Ancestry continues to add to their offerings, including many digitized English church records, wills, military records, etc.

A staff member of the ORL will be assisted by our KDGS Genealogist in Residence to provide lots of expertise to help you learn how best to use Ancestry to wring out the vast amounts of information offered by that website. No preregistration and no fee – just bring your enthusiasm and some information as a starting point for your research.

This is a free event open to the public.